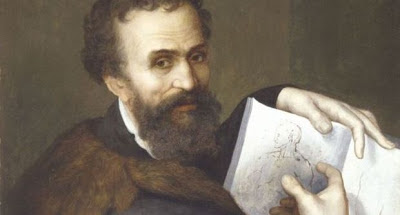 Today in Florence, March 6, there will be a procession from the town hall to the Santa Croce Church in honour of the birth of Michelangelo Buonarroti who was born on this date in 1475. They will place a wreath on his tomb which is located on the inside of the Santa Croce church. This was his parish church as his family had their family home close by in via Bentaccordi.

Michelangelo died in Rome at the age of 89 on 18 February in 1564. He was first buried in the SS. Apostoli church after a very modest and small funeral organised by the compagnia di Giovanni decollato (the confraternity of the decapitated John) to which he had been a member for about fifty years. Many of the Florentine artists resident in Rome were members. His nephew, Leonardo, his heir, came to Rome some days after his death and stayed some weeks in order to organise his deceased uncle’s estate and belongings. He organised for Michelangelo’s body to be transported back to his hometown, Florence. The body was smuggled it out of the city of Rome hidden in a bale of merchandise. It arrived in Florence on March 10 and held in the campagnia dell’assunta and was then brought to Santa Croce church on March 12. Thirty two artists from the newly founded Accademia del Disegno along with Vincenzo Borghini (the judicial overseer of the Accademia) carried Michelangelo’s body to the church accompanied by torches. The body was placed in the sacristry of the church and the procession had attracted a huge crowd. Leonardo Buonarroti then began the organisaton of a tomb for the great artist. He had planned on the tomb being designed and planned by Michelangelo’s friend, Daniele da Volterra, who had been one of the few people who had been with Michelangelo when he died, and some of the Roman artists in his circle, however Vasari forced him to use Florentine artists from the newly founded Accademia del Disegno. The tomb was finished some years later.

Five months after Michelangelo’s body had been brought to Florence, there was a huge funeral staged for him in San Lorenzo. Never before had there been a funeral for an artist such as this, the next funeral that would be as big would be that of the Grand duke Cosimo I. The whole of the San Lorenzo church was decorated with huge paintings depicting episodes from the artist’s life with a fifty three foot long catafalque under the transept crossing. Michelangelo, who disliked pomp and ceremony, was given a funeral of a princely scale.
Posted by FREYA MIDDLETON

Email ThisBlogThis!Share to TwitterShare to FacebookShare to Pinterest
Labels: Florentines of Influence