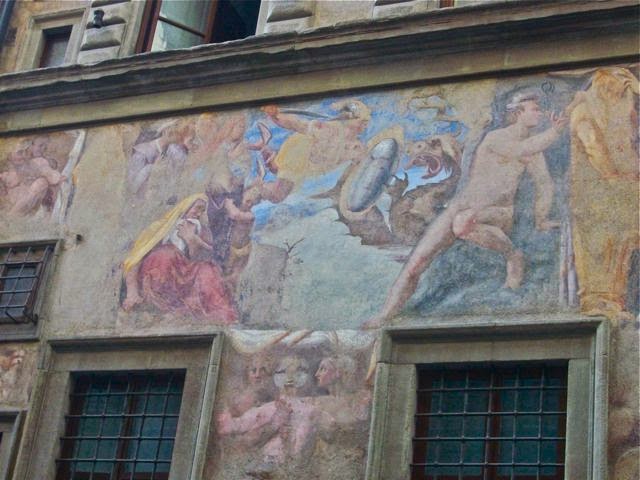 The splendid palazzo Mellini-Fossi is in via de Benci at number 20. The land was bought by Duccio di Noferi Mellini in the 1460s and the facade that we see today is thought to have been built in the beginning of the 1500s. The style is in line with that of the Cronaco (palazzo Guadagni in piazza Santo Spirito) and Baccio d’Agnolo.

The style reflects a palazzo of a wealthy merchant from the second half of the 1400s to the first half of the 1500s. Each of the three storeys of the palace is demarcated by moulded string courses and it is five window bays wide. There is the characteristic Florentine feature of the bench in the ground floor and a wine door on the right. Finally, there are also the typical extended eaves from the roof. The building was sold numerous times before becoming the property of Marquess Federico Fossi in 1890, explaining the palazzo’s current name, palazzo Mellini-Fossi.

The facade has the most wonderful fresco decoration. They are in good condition after the restoration from the Opificio in 1994-96. However, I can’t imagine what splendour it would have been when just finished in its entirety in the 1570s. This was during the reign of Grand duke Francesco I and his wife, the grand duchess, Joan of Austria, which explains the huge coat of arms in the middle above the main entrance of the palazzo. Half is the Medici crest, the other half, the crest of Joanna of Austria.

Decoration has all but disappeared on the bottom half of the ground floor but it remains for the most part recognisable, on the first and second floors

The decoration depicts scenes from the life of Perseus, from his birth to the most famous events in his life.

His mother was Danae. Her father, Acrisius King of Argos, had no sons and consulted the oracle at Delphi who warned him that one day he would be killed by his daughter’s son who she would have with Zeus. Consequently, to avoid Danae from ever having any contact with the outside world, he kept her in a bronze chamber in the palace open to the sky. But Zeus came to her in a shower of gold. After she had Perseus (a demi-god), Danae’s father wanted to rid himself of both of them to keep his power but,  not willing to provoke the wrath of the gods by killing them both, he cast them into the sea in a wooden chest. They were found by the brother of the ruler of a new land and given shelter and looked after in this new community. The ruler was Polydectes, who fell in love with Danae. Perseus however was protective of his mother and refused to let Danae near him. He hashed a plan to rid himself of Persues. He planned a false marriage and when the guests arrived with presents, Perseus, who was invited, didn’t arrive with anything as they were poor. Polydectes pretended to be furious and called Perseus hopeless. Perseus exclaimed that he could bring any present that he wished. Polydectes demanded the head of Medusa, the Gorgon.

Perseus walked for days on the land of the Gorgons where these frightening women lived with snakes as hair and when you looked at them you turned into stone. He was feeling desparate when one day Hermes (Mercury) and Athena (Minerva) appeared to him. They were all children of Zeus, his half brothers and sisters. Hermes gave him his winged sandals and the sickle, which Cronos (Saturn) used to overpower Uranus, to kill Medusa. Athena gave him a shield so polished that he would be able to see the reflection of Medusa rather than looking at her directly. They told him to go find the Graeae who would tell him how to find the Nymphs of the north who would in turn give him the cap of darkness and a magic wallet as well as tell him how to get to the Gorgon’s lair. The three Graeae were perpetually old cranky women who shared one eye. Perseus hid behind a bush and watched them and then when one handed the eye to another, he sprang out from the bush and grabbed it. He threatened to never give the eye back unless they told him where the nymphs lived, so they did. The nymphs gave Perseus the cap of Darkness, which makes the wearer invisible, and the magic wallet where he can put the head. They told him how to arrive at the Gorgon’s lair. He went very far north until he found an island surrounded by rocks and statues which used to be men but were now turned into stone. He saw medusa sleeping in her lair along with her sisters and beheaded her with the sickle, looking at her on his shield, and put her head in his bag. When her sisters woke up and chased him he put on the cap of Darkness and flew away.

On his way back home he saw Andromeda chained to a rock about to be eaten by a sea monster. He flew down and showed the sea monster Medusa’s head and the monster turned to stone. He freed Andromeda and they were married. There was a fight during the wedding celebrations with Phineus who had had his eye on Andromeda before Perseus came onto the scene, and he was turned to stone also. Flying back home they stopped at Larisa, the birth place of both Danae and Perseus (not that he knew this) and he participated in some games. He threw a discus which hit Acrisius, the king and his grandfather, in the crowd and he died. The oracle was right! 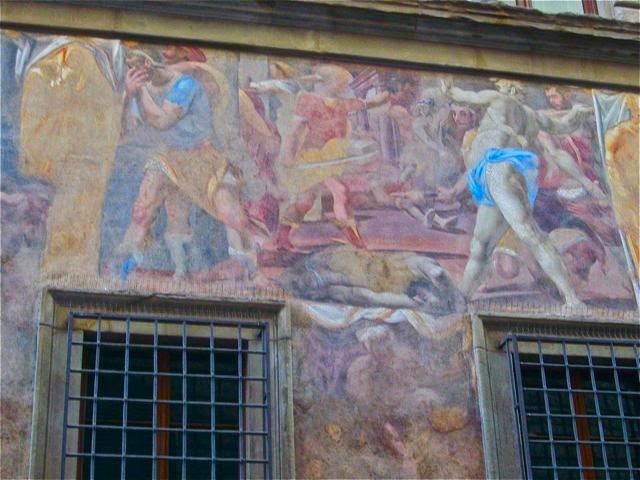 He finally arrived back home with her and entered Polydectes’ court and told his friends to shield their eyes and then showed Medusa’s head and Polydectes and his courtiers turned to stone. He and Andromeda ruled there after.

So the next time that you are standing in front of the palazzo Mellini Fossi check out the scenes: 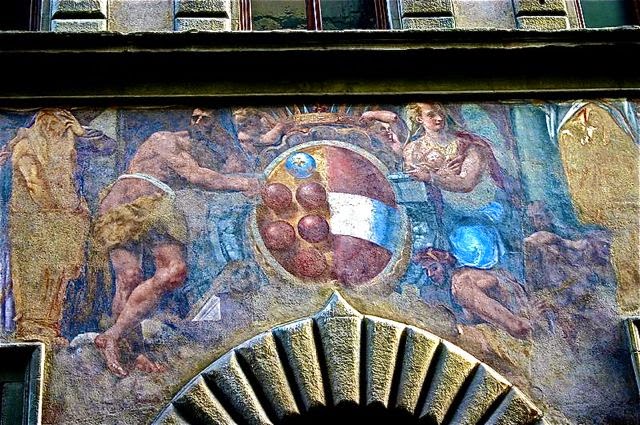 On the ground floor from left to right:

Perseus slaying the sea monster, Andromeda chained to the rock, the coat of arms of the Medici/Hapsburg (above), Phineus and his followers being turned to stone.
There are eight scenes, from left to right:

Acrisius, king of Argos before the Delphi oracle, Danae seduced by Jupiter, Danae and her newborn child cast into the sea in a wooden chest, Persues receiving the shield from Athena and winged sandals from Hermes, Perseus removing the Graeae’s only eye, Perseus slaying the Gorgon Medusa, Perseus with Pegasus seeking shelter from Atlas, Perseus brandishing the head of Medusa.
Posted by FREYA MIDDLETON