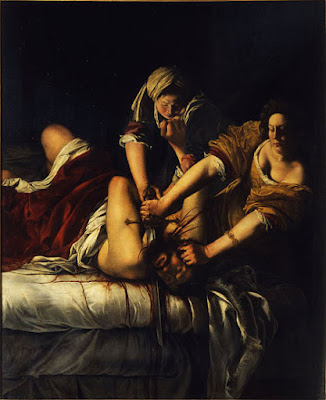 Artemisia Gentileschi (1593-1653) depicted Judith from the Old Testament at least four times in painting; she quite possibly had painted more of this subject but as not all of her oeuvre has survived, we cannot be sure. Judith is the female equivalent of David in the Old Testament. She, like David, against all odds, saved her city from an enemy. Holofernes, an Assyrian general, was camped outside her city with his army intent on attacking it the following day. Judith, a virtuous and chaste young woman, aided by her maid servant Abra, took the situation in hand the evening before the attack and stole into Holofernes’ tent. All glammed up and oozing charm, she managed to get Holofernes to drink copious amounts of wine to the point that he was inebriated and weakened.  She then took his sword and beheaded him, putting his head on a pike in the camp site for his soldiers to see the following morning. Without a leader, they retreated and her city was saved. 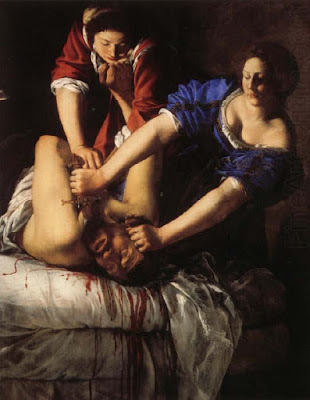 Artemisia shared several characteristics with Judith. The two woman had a strong sense of independence, determination and strength, and neither was afraid of tackling seemingly unsurmountable tasks. Artemisia painted many female subjects, in particular women who were put on trial or had been accused of something, such as Susanna from the Old Testament or Lucretia from Roman Antiquity. She was not only a painter in her own right, which was basically unheard for a female in the early seventeenth century, but was the first woman to be invited to join the Accademia del disegno in Florence, the first Fine Arts Academy in the modern world.
Born in Rome, she trained under her father, Orazio Gentileschi, in very early years of the 1600s and by her early teenage years she was the driving force of the workshop beside her father. This was the period that the northern Italian artist, Caravaggio, had created shock waves through artistic Rome with his dramatic and powerful style imbued with high tension and psychological weight. Artemisia was hugely influenced by his style. His technique proved to be the best vessel through which she could transmit the energy, strength and power that she longed for her canvases to communicate. She, like Caravaggio, pared down the number of figures in her scenes so as to spotlight even more the depicted moment. She too used sharp contours, primary colours and dramatic lighting like in a theatre (strong chiaroscuro).
Like Caravaggio, in many of her works, she managed to covey a running moment of time. Somehow she managed to depict her subjects in such a way that our mind continues with what could be the following scenes that would take place after the one on the canvas in front of us. Using as an example the two very similar paintings of Judith and Holofernes hanging in the Uffizi gallery in Florence and the Capodimonte museum in Naples, we see that Judith is in the middle of killing Holofernes; the action has started but is not yet finished. We as spectators, feel the mid-kill, the blood is spurting up and will stain Judith’s dress and we feel the strength that Holofernes still has in attempting fight of Alba the maidservant.  And finally, we see the complete conviction in Judith’s expression. He is not yet dead but no longer really alive.
Now let’s take a look at the paintings depicting Judith and Abra alone, hanging in the Pitti Palace in Florence and the Detroit Institute of Arts. Here the killing is done and they are carrying the general’s head. Where is the mid action here? They are still in the camp, in enemy territory, and they have just heard a sound and their heads are shown whipping around to see who is there! Artemisia wraps us up in the tension of the scene, the drama and the suspense. We become part of the painting. 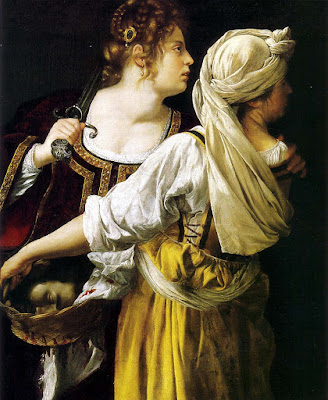 One month after the trial had finished her father organised for her to be married to a relatively little known Tuscan artist and she moved to Florence. Here, however, she earned fame for her talent and her person. She was particularly esteemed by the Medici Grand Duke Cosimo II and his wife the Grand duchess Maria Maddalena of Austria and some of their most illustrious court members, such as the court astronomer and mathematician Galileo Galilei, and one of the most brilliant intellectuals in the city, Michelangelo Buonarroti the Younger (the master artist’s great nephew). Both the Medici and Buonarroti commissioned works from her and Artemisia and Galileo wrote numerous letters to one another.
Strong in art and strong in nature, Artemisia was all girl power in a man's world! 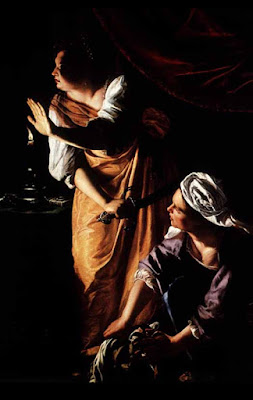