CANTUCCI - THE BISCOTTI THAT ARE COOKED TWICE, DIPPED TWICE AND INDULGED IN COUNTLESS TIMES 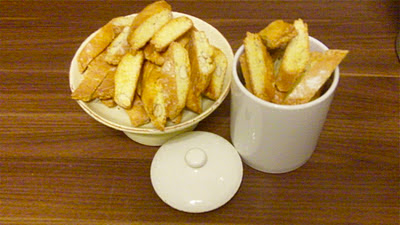 The advertising campaign for the Pringle potato chips ‘once you pop you just can’t stop’ perfectly describes my cantucci addiction. I confess to being shamelessly hooked on cantucci.  I cannot stop at one, or even ten. These almond biscuits are typical of Tuscany.  Called biscotti in the Anglo-Saxon world, they now commonly go by the name cantucci (or cantuccini) in Italian but ‘biscotti di Prato’ is their real name.

Prato, a Tuscan town located about 30 kilometres outside of Florence, is their place of origin as the recipe stands today. The biscuits have been documented in Prato since the seventeenth century, however, they were revamped by the local pastry/biscuit chef Antonio Mattei in the nineteenth century, who opened his shop in 1858, where it still is today.


Cantucci were internationally recognized for their scrumptiousness when, in 1867, Mattei took them to the Universal Exposition (World Expo) in Paris where they received a special mention. These biscuits began to be the hottest sellers in his shop, and their name shifted from ‘biscotti di Prato’ to ‘cantucci’ as his outdoor shop sign read ‘Fabbricante di cantucci’ (Cantucci producer).
This sign referred to another type of rustic biscuit which he sold, hugely popular in the area, made of toasted bread, olive oil and aniseed. Over time, as the production of ‘biscotti di Prato’ superseded that of the traditional cantucci, the name changed. The shop now has been run by the Pandolfini family for three generations and they make the Cantucci to the traditional recipe. These are still the choicest ones to buy for somebody as a gift, even though, I must admit, they aren’t my favourite. I like them a bit more rustic  with a larger quantity of almonds and without the pinenuts that they add.
A fixed standard on most Tuscan dessert menus is ‘Cantucci & Vin Santo’. The biscuits are served with local sweet wine in which the cantucci are dipped. These biscuits can be eaten whenever you like, however this is how they are most commonly served here. 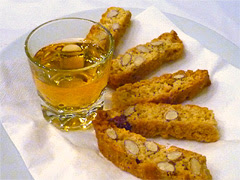 I had my first cooking lesson yesterday with my great mate Graham (renowned far and wide for his divine cooking skills and foodie talents), and we started by making cantucci - and they were fabulous! The ingredients are: self-raising flour, sugar, eggs, butter, toasted almonds and salt.
The mixture is then formed into a type of log, left for one hour and then cooked for about 30 minutes. 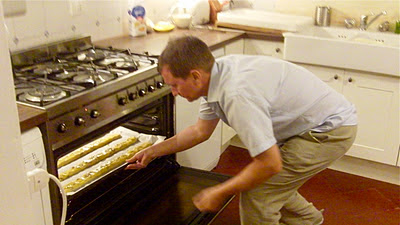 Afterwards, the logs are cut diagonally, about 1cm in width, and then put back into the oven for a few minutes to crisp a little more on the exterior whilst remaining a little soft inside. 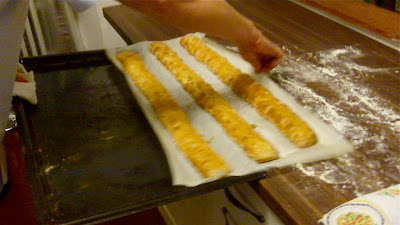 Stay tuned for the next foodie blog with another lesson with Graham in my new series titled 'Prosciutto Grigio'.

Most bakeries in Tuscany sell cantucci, especially in the Prato and Florence provinces. There are two shops in the centre of Florence which specialize in them and where you can also find variants (fig and walnut, orange and dark chocolate etc) even though I am staunchly conservative and stay with the original almond kind.
Where to buy in Florence:  IL CANTUCCIO BISCOTTI DI LEONARDO in Via Nazionale 121/R, and the more recently opened family-run place IL CANTUCCIO in Via Sant'Antonio 23/r. Both are in the area of the central food market (mercato central).
Posted by FREYA MIDDLETON