IN LIGHT OF HALLOWEEN...... THE ENGLISH CEMETERY IN FLORENCE 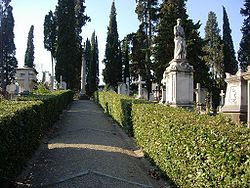 Considering it's Halloween, and tomorrow All Saint’s Day, I thought it appropriate to write a few lines on the so-called ‘English cemetery’ in Florence. Located in piazzale Donatello, the cemetery appears like an elevated island of the dead in the middle of the ever-busy ring road around Florence. However when first constructed it would have looked quite different.

Contrary to the nickname of the cemetery, it wasn’t created exclusively for English citizens -  quite the opposite. The Swiss Evangelical reformed church bought the land from the Grand Duke of Tuscany, Leopold II, in 1828, to build an ecumenical cemetery (thus, open to all Christian faiths; Orthodox and Protestant), the first in the area. It was located outside the still standing and perfectly intact medieval city’s walls from the 1330’s.

In 1865 when Florence became the capital of the newly unified Italian peninsula, the city’s walls were destroyed as part of the renovation project headed by Giuseppe Poggi. The cemetery became engulfed into Poggi’s renovation project and finished by being in the middle of a busy multiple lane dense traffic thoroughfare, as well as being was remodeled into the current oval shape. The medieval walls were torn down and replaced with a tree-lined ring-road encircling the city. Neoclassical buildings were built along the ring-road and suburbs renovated. Many of the new Florentine residents moving to the city due to its new capital status, as well as the bourgeois Florentine families, bought houses along these avenues. Moreover, Poggi planned for artist’s studios to be in the area surrounding the cemetery island thus giving name to one of the major streets leading off the ring-road ‘via degli artisti’.
There is a predominance of English buried in the cemetary, hence the nickname. However, this belies the intention of the place which is conveyed by the tombstones. The inscriptions are in numerous languages, French, German, Cyrillic, Greek, Danish and Romansh. The cemetery was closed in 1877, however the Florentine council has recently allowed it to be used by the Swiss church (which still owns it) for cremated remains only. One of the most famous people buried here is the English Victorian poet, Elizabeth Barrett Browning (1806-1861), who lived for many years in Florence with her husband, the poet Robert Browning (he is buried in Poet’s corner in Westminster Abbey). The Swiss Giampietro Vieusseux, founder of the Gabinetto Vieusseux (a reading room which became the one of the main meeting places for intellectuals in Florence during the Risorgimento) is also buried here.
The best known painting by Arnold Bocklin (1827-1901), the Swiss symbolist artist, is the ‘Isle of the Dead’ of which there are four versions painted by the artist, inspired by the English cemetery of Florence. The first three versions of the subject were painted in Florence, he had his studio very close by, and they are deeply personal as it was where he had buried his seven month old daughter. The painting shows a dense cluster of Cypres trees on an isolated area with an aura of eternity.