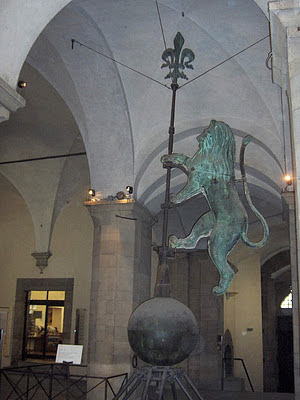 Since the medieval period, the lion has been the animal symbol of Fiorenza (medieval Florence).

The lion, representing the Republic of Florence, became known as the Marzocco. The origin of the name is believed to derive from Martocus – or little Marte or Mars, referring to the god of War. When the statue of Mars, at the foot of the ponte vecchio bridge, washed away with the bridge in the 1333 flood, it was replaced by a lion sculpture which the citizens called little Mars.

In the 1300’s a Marzocco lion sculpture, the collective symbol of Florence, was the only sculpture in the town hall square (Piazza della Signoria). All the other sculpture was placed there much later, from the 1490’s onwards. The lion can be seen in the background of one of the scenes from the private family chapel of the Sassetti family in the Santa Trinita church by Domenico Ghirlandaio, frescoed in the early 1480’s. 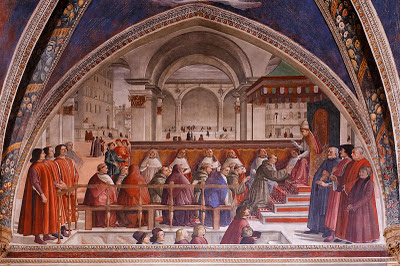 The lion is to the left of the town hall building and there is no other sculpture in the square nor under the open portico loggia. The Marzocco that is now there is a copy of the splendid sculpture by Donatello. Carved out of local grey ‘pietra serena’ stone from the surrounding Florentine hills, he proudly holds the coat of arms of the Florentine Repubblic, the giglio (red lily on a white back ground). 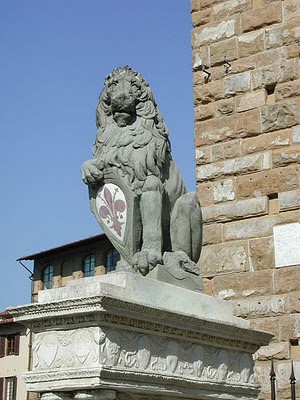 The Marzocco by Donatello was placed here in 1812 when the original medieval lion was in a bad state of affairs.  He had been made for the new snazzy papal apartments in Santa Maria Novella for the advent visit of Pope Nicholas V.


The street behind the town hall is called the Lion street (via dei Leoni) precisely because it was here that they kept live lions in cages for the authentic rendering of their animal symbolism. Already, from the 1200's, live lions in the flesh were kept in the Bargello building, which was then the Palazzo della Podestà (home to the official elected foreign arbitrator to oversee Florentine matters of council). The lions were then moved to the area near to the Baptistry, before being located to the area behind the town hall in 1350 and, thus, giving name to the street. They remained here for circa two hundred years until Cosimo I de Medici, in the middle of the 1500's, moved them to the area near San Marco, at the recently constructed ‘Giardino dei Semplici’ (the botanical garden).

Grand duke Pietro Leopoldo of the Lorraine-Hapsburg family (the rulers after the extinction of the Medici line from 1737 until unification in 1861), in the second half of the 1700’s, decided to do away with them altogether. In the chronicles much is written about the lions, their behaviour, births and their characters. There were sometimes up to the twenty-eight in the cages behind the town hall. On the night of Lorenzo the Magnificent’s death, two of the lions tore one another to pieces!

The two lions patrolling the entrance to the loggia dei Lanzi were placed here in 1789 by the Lorraine-Hapsburgs, having brought them up from the Villa Medici in Rome where they had been guarding the staircase in the villa’s garden since 1600. 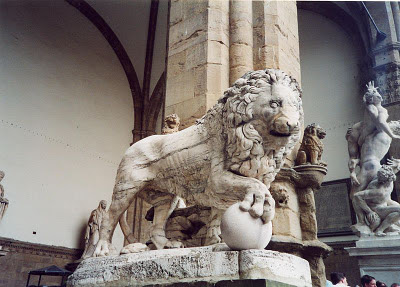 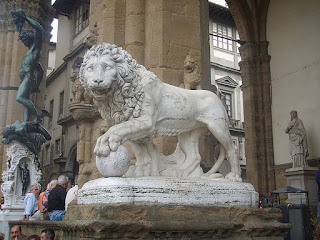 The lion above is from the 2nd century B.C and the one on the left is from the 1590’s, commissioned to pair his ancient brother by the Grand Duke Ferdinand de Medici, a great lover and collector of antiquities.
Posted by FREYA MIDDLETON