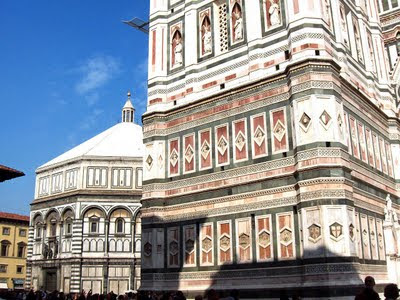 The bell tower in the Piazza del Duomo (Cathedral Square) is often overshadowed by the real protagonist, the house of God (the Duomo = domus dei = house of God), but it is one of my favourite medieval buildings for its complex wonderful symbolic decoration. It is nicknamed ‘Giotto’s tower’ as the great artistic maestro of the Trecento was the first architect of the structure in 1334. After his death in 1337, Andrea Pisano continued the construction and it was brought to completion by Francesco Talenti in 1359. There are two horizontal superimposed rows of bas-relief decoration which wrap around the lower part of the structure and this is what I love most. The decorative cycle was begun under Andrea Pisano and completed in the following centre under Luca della Robbia.

The campanile, being a square structure, has two rows of seven bas-reliefs on each of the sides. Concentrating first on the top register of diamond shaped bas-reliefs (the earliest, largely done under Andrea Pisano from the late 1330’s) the seven facing towards the Piazza della Signoria (the centre of the Florentine political life) are the seven virtues (three cardinal – faith, hope, charity & the four cardinal – prudence, temperance, fortitude, justice), as the Florentines elected to the government must rule with virtue.

The seven facing towards the east (to back of the square) are the seven liberal arts (the trivium – rhetoric, grammar, logic & the quadrivium – music, astronomy, geometry, arithmetic) as the face where the first Florentine university was situated (the street ‘via dello studio’ reminds us of this location).

The seven facing the cathedral are the sacrements (baptism, confirmation, Eucharist, ordination, extreme unction) and finally facing the baptistery are the seven known planets at the time (Saturn, Jupiter, Mars, Apollo, Venus, Mercury, Moon) implying that we are all part of God’s great organisation and his influence filters down through the concentric perfect planetary spheres to us on earth, and baptism is the first step to ensure that the soul rejoins from whence it came after death.


Directly below the hexagonal bas-reliefs are the Industries of man, what man is capable of when using the above structures.
There is construction, civil law, fabric production with a depiction of a loom (the back bone of the Florentine merchant economy), astronomy, painting, sculpture, but my favourite is the depiction of Daedalus. He represents human ingenuity and genius. He is shown with the wings that he made in order to fly away from the island of Crete after falling out of favour with his patron, the King Minos, when the labyrinth that he had created to house the Minotaur had been mastered by Theseus and the half bull half man had been killed. In the bas-relief Daedalus (his name means skilled worker from Greek) is depicted with feathers all over his body, which I think is a nice touch.


The inclusion of human ingenuity personified sums up the Florentine spirit at the beginning of the fourteenth century. With their population ever increasing and business flourishing, they had brimming confidence. Its inclusion helps us understand how a republic can commission a dome for their cathedral larger than what was possible for them to actually construct with the knowledge available at the time. They just assumed that by the time they did come around to building it, somebody would have figured it out. The campanile displays the Florentine Republic in all of its religious, civic and economic pride and is worth a closer look when next in the square.
The bas reliefs are now copies and the originals are displayed very well in the museum of the cathedral located in the cathedral square behind the apse (open everyday Monday-Saturday 9am-7.30pm, Sunday 9am-1.40pm, admission: 6euro)
Posted by FREYA MIDDLETON