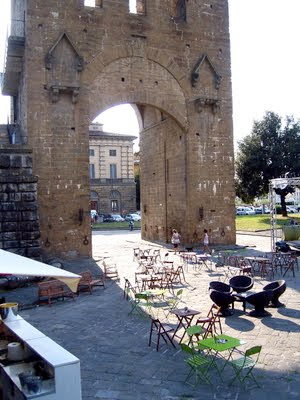 A wonderful American professor, who brings students to Florence every year, will be tickled pink when she hears of another old tall monument to climb in her beloved city. She climbs every tower or tall old thing in all the cities that she visits and, thus, so do I when I go with her. In Florence, until recently, there were traditionally only two sites to climb: the king of all domes in the modern world, the magnifìcent cupola (1420-36) of the cathedral by Filippo Brunelleschi (463 steps), and the gothic bell tower in the same square (414 steps). Last year the two top floors of the Orsanmichele church became accessible on Monday only (see previous blog entry) and now this year we can add the Torre di San Niccolo on the Oltrarno side of the city. This lone soldier standing on its own, seemingly built in splendid isolation, gives an erroneous idea of its original function. The large opening at ground level hints at its most important role - this tower was once part of the last set of walls that protected one of the most important and wealthiest republics of the medieval world.


The Florentines decided to extend the walls of their city for the last time in second half of the thirteenth century. They commissioned their favourite architect, Arnolfo di Cambio (also the first architect of the current cathedral and the Santa Croce church for the Franciscans to name just few of his major undertakings) to provide the plan, and construction began in 1284. This major third set of walls, dramatically increasing the land territory of Florence, took circa fifty years to complete. In 1340 the walls, the large entrances and the defensive towers built above them, were completed.
These walls were completely intact until the 1860’s when they were largely destroyed in a regretful plan of renovation when Florence was briefly the capital of the newly formed Italian nation. A tree lined avenue was created, where the walls had been, for the carriages (this is still the main much congested ring road of the city today). The majority of the actual entrance ways were left in place as historical reminders.  They look a little incongruous, however, standing alone in the middle of five lanes of traffic. 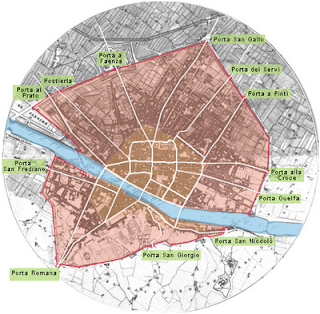 The Saint Nicholas tower was once one of the four major entrances to the city on the south side of the river. The other three, all of which are intact, are the Porta Romana (with her original wooden doors), Porta San Giorgio and Porta San Frediano. The large wooden doors would open at sunrise and close just after sunset and were of course always guarded by sentries, just as the borders and customs are in countries and airports today. The doors were often called after a saint or religious entity important in that local area (there is the ‘church San Niccolo Oltrarno’ a stone’s throw away from the door) or where the direction may lead you, as in the case of Porta Romana or Porta Faenza (on the north side of the river). They all had towers (circa 200 feet tall) soaring up above the entrances for the sentries to survey the countryside or ‘contado’ as it is called in Italian. The Saint Nicholas tower is the only one that remains above the city wall entrance, as can be seen by the truncated other doors all around the city. The towers above the doors were destroyed by the Florentines themselves in an act of defense in 1530, when they were being besieged by the Spanish troops of the Holy Roman Emperor and the exiled Medici family. So that the canons wouldn’t be able to fire against the towers and cause great destruction when falling inside onto the people, the Florentines truncated the doors, leaving only the entrances. There was no need to destroy the one above Saint Niccolo as the hills directly behind it made it a very inconvenient station for the troops on the outside.
Every day, from 4pm - 8pm, small groups are accompanied up to the top of the tower every half hour. The view from above is lovely of both the city and the surrounding contado.

There is a little explanation about the history of the site in Italian given by the guard who accompanies the group and the admission fee is 3euro. I did have to wait until the following group as it was already booked out the time before. It is possible to reserve a place ahead of time, tel: 055 2768224, or just try your luck as I did and, if you need to wait, there is a little outside bar in the summer months down below where you can sit and relax, sipping a prosecco, whilst waiting for your time to climb. The tower is open until 1st October!